It was an invite by takbo.ph administrator which compelled me to go for LSD.

LSD, not the hallucinogen, stands for Long Slow Distance, the practice of running longer distances at an easy pace rather than shorter ones to exhaustion (Runner’s World). The slower pace allows one to gain more fitness.

It was a timely invitation since I didn’t register for Takbo Para Sa Kalikasan Fun Run so running with this group would be a good change. I really planned to go for LSD at the Fort with a pace of 7 or 8 minutes/km only.

When I arrived at the Fort, I was so surprised to see more than 50 runners. To me, it was like, “Whoa, there must be another race here.” I scanned the crowd looking for some familiar faces. I spotted i2runner. Then, there was the fast Master Totoy. And, Kinderdorf. And, Jazzrunner. Then, that of Que and Jinoe. Later, I learned that there were 70 of us who joined in this long run. Wow, that was a minus 70 from the crowd for Takbo Para Sa Kalikasan Fun Run!

The run started with a briefing on the route to take. I didn’t listen much of it and instead, went for a short warm up run. When I came back, the pack of runners started already. I reached the tail end and paced with fellow Happy Feet Jinoe and Que. This was the third group and considered the “fast” group. (Based from Jazzrunner’s account on his blog, he classified the group as fast, faster, fastest.)

The route was more or like the ones we had during the VSO Kabahagi Fun Run, UNICEF Run, RUNew, and Happy Run sans the inside of Heritage Park. After we\’re through with the first turn around point along Lawton Avenue, the 10k distance runners decided to head back to Bonifacio High Street to wait for us. And, we, runners who were addicted to LSD, continued to run Bayani Road and back to BHS. After resting for a few minutes, the same group headed back to McKinley Hill for another hill training. All in all we did a 20.5km LSD.

The LSD ended with a speech from Jinoe who later asked each runner to introduce self. A group photo, courtesy of those runners who brought their cameras, made the day complete. 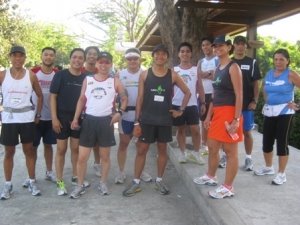 Formal Pose with R.O.X. as background

Start of the wacky pose

Getting the hang of it

Really getting out of hand!

Addiction was not limited to LSD but to photo shoots as well!

It was, indeed, another memorable moment of my running experience!

Thanks to you guys!